You know the feeling you get when you pull into a new car lot? A rather good one, I would say. You see all these really nice cars. You see the Range Rover and think Pat Mahomes. You see the BMW and think Deshaun Watson. Then you see a Prius and think Mitchell Trubisky. That feeling with that Range Rover is fantastic, and the BMW is top of the line in handling, then you drive the Prius, and you think “eh”, nothing to write home about. Nothing special, but those other two, the BMW and Range Rover just blew you away. Yet you only drove them for a combined 20 miles, maybe.

I go on Twitter this morning after the Bears 24-17 victory over the Seahawks last night, and a good amount of people are just giving up on Trubisky. Here are Trubisky’s stats through his first 14 career starts: 2,564 yards, 9 passing touchdowns, 9 interceptions, 77.9 passer rating, a 61.2 completion percentage, and five wins.

Take a look at Watson through 9 starts: 2,185 yards, 22 passing touchdowns, 10 interceptions, a 98.5 passer rating, a 61.1 completion percentage, and three wins. Trubisky’s numbers are clearly the worst of the bunch, but some are giving up too quickly. 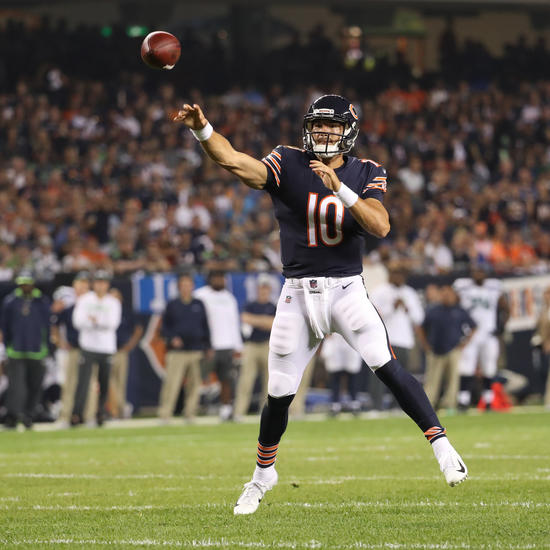 Mahomes has had three starts with arguably one of the best game planners I’ve ever seen in Andy Reid. Watson has only had nine starts with one of the best receivers in the entire league. Trubisky has had two starts with a competent head coach and good weapons. Aside from that, Trubisky has had twelve starts with Kendall Wright and John Fox. Yikes. I am just saying that the comparison is unfair for all three players at this point in their careers. They all have a small sample size, and we just need to wait in evaluating if the Bears, Chiefs, and Texans made the right choices about drafting these quarterbacks.

Look, I’m not saying that Mitchell Trubisky is the best quarterback out of the 2017 class, because we can’t know yet. These young players need time to develop at the game’s highest level. Maybe Watson doesn’t recover from the ACL like we thought he would. Maybe Mahomes just had a fluke two games. We simply can’t know yet. There just isn’t enough substance to make a factually based comparison. These young players need time to gel in their new offenses and need to get experience going up against the best football players in the world.  Come to me in 2022 when a fair comparison can be made. Just stop it at this point. At first glance, you see the Range Rover, the BMW, and the Prius, but perhaps by the time it is all said and done, we may say Trubisky is a Lamborghini.

If there’s one thing that makes Lucas Patrick stand out, it’s his giant dolphin dome VICIS…